Oh hey there! Are you ready to dive into another easy peasy cupcake creation here with us today? You know we are! We’re currently feeling all those chilly fall vibes (although it’s still 100 degrees in Louisiana in October!) and baking all the things, we hope you are too! Even though we totally respect and love pumpkin spice (aka queen flavor of fall) we can’t help but express our love for this new maple cinnamon cupcakes recipe! 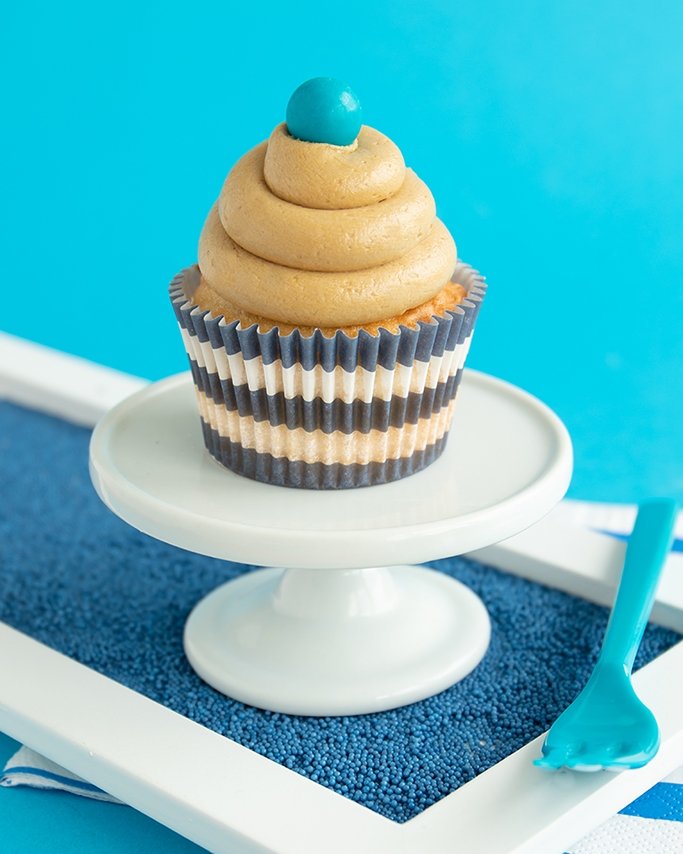 Though they really are great all year around, we totally love to bake them up in the fall. Cupcake expert tip: heat them up in the microwave just a bit before enjoying and seriouslyyyyyy they are melt in your mouth amazing. We might have even tested this out by drizzling a little maple syrup over the top too. I guess that lets us call these ‘breakfast’ right? That’s our thought process anyway.

When we say easy, we really mean easy! These guys are part of our series of doctored up cake mix cupcake recipes which makes them extra fast and extra yummy. This maple cinnamon cupcake recipe starts out with a yellow cake that has cinnamon sugar swirled right in, then you finish the cupcakes off with a cinnamon maple frosting. Together they make a pretty amazing pair. No need for candles today, these guys make the whole kitchen smell amazing.

As always our cupcakes were dresses up with our BakeBright greaseproof cupcake liners. If you’ve never used them, learn all about them here. This time we used our navy blue stripe, we thought they needed a little color to make that cinnamon maple frosting POP!

4. While cupcakes are able to cool completely, it's time to make your cinnamon maple frosting! In a large bowl, cream butter until smooth. Add maple and vanilla extract and mix until combined. Add powdered sugar (slowly!) one cup at a time and cinnamon. Add milk one Tbsp. at a time, beating in between additions until desired you reach piping consistency. You may want to add brown food coloring if your brown isn't strong enough for you, this will vary with maple extracts.

5. To finish the cupcakes, use large round piping tip and pipe a smooth swirl of cinnamon maple frosting onto each cupcake and enjoy.

Can’t Get Enough Of Cupcakes? Us too! Check Out A Few Of Our Cupcake Recipes!

You may also love

How To Make Square Cupcakes With Round Cupcake Liners

Come on in to a world of sprinkle mixing, cupcake liner designing, color loving, party and baking supply fun! Be prepared to smile, a lot.